An interview with Greg Poling, director of the Asia Maritime Transparency Initiative at CSIS. 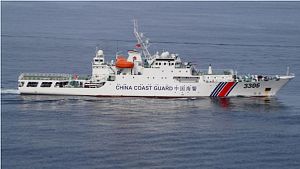 While the global coronavirus pandemic continues to dominate the headlines, Asia’s flashpoints continue to simmer. The South China Sea is no exception, as evidenced by recent developments including China-Vietnam tensions. To get a sense of these developments and more, The Diplomat’s Prashanth Parameswaran talked to Greg Poling, director of the Asia Maritime Transparency Initiative at the Center for Strategic and International Studies.

As of late last year, some of the key developments to watch with respect to the South China Sea in 2020 had become clear, including Vietnam’s occupation of the ASEAN chair and continued tensions in the U.S.-China relationship. How have the events we have seen thus far in 2020, including the outbreak of the global coronavirus pandemic, affected your expectations for the South China Sea this year in terms of both continuity and change?

A storyline has developed over the last few weeks suggesting that China is taking advantage of global distraction during the pandemic to increase its assertiveness in the South China Sea. That is an understandable assumption given the string of incidents lately, especially the sinking of a Vietnamese fishing boat by a China Coast Guard ship in the Paracels. But I think it misses the point. China hasn’t changed its behavior at all in response to the coronavirus pandemic. The aggressiveness it is currently displaying toward Vietnamese fishing, Malaysian oil and gas operations, and everything in between was also on display six months ago and will presumably be unchanged six months from now. If anything has changed, it is that continuing to put its boot on the necks of Southeast Asian states in the middle of a pandemic leaves observers more scandalized than they otherwise might be.

The April 2 incident between China and Vietnam was the latest, unsurprising reminder of the fact that Beijing remains determined to advance its claims in the South China Sea even as other claimant states continue to deal with the fallout from the coronavirus that originated in China. What is your assessment of China’s calculations on the South China Sea amid the wider domestic and foreign policy environment it faces currently?

Beijing is clearly determined to establish control over all peacetime activity throughout the nine-dash line, and potentially in some areas beyond it, within the South China Sea. The completion of its island bases in the Spratlys has allowed China for the last several years to protect near-constant coast guard and militia pressure throughout every inch of the nine-dash line. And on a day-to-day basis those operations are run by local actors, whether in the Paracels, the South Sea Fleet, the Hainan provincial government, or SOEs [state-owned enterprises] like CNOOC [China National Offshore Oil Corporation]. Beijing’s role is two-fold: under Xi’s leadership, it has created a policy environment that encourages these lower-level actors to go out, harass the neighbors, and enforce Chinese rights in myriad ways; and when one of them inevitably miscalculates and sparks a crisis (as the CCG did [in early April) in the Paracels and in December/January in Indonesian waters) Beijing moves into damage control mode. This decentralization of maritime assertiveness is why we shouldn’t expect distraction in Beijing, even a global pandemic, to alter China’s course.

Turning to the four Southeast Asian claimants, we have seen a range of developments occurring as well in terms of the larger political and security context, be it the sudden government change in Malaysia or the uncertain future of the U.S.-Philippines Visiting Forces Agreement (VFA). What are some of the key notable dynamics that you are watching with respect to Southeast Asian claimant states in 2020 that could affect the management of the South China Sea issue?

Before the pandemic my top answer would have been Vietnam’s multilateral diplomacy as it took the ASEAN chair and a seat on the UN Security Council. But the pandemic has severely limited its ability to use those leadership roles as well as it might have liked. Still, Hanoi is the only place in Southeast Asia anyone is likely to find political courage on the South China Sea these days, so it bears watching. The next most important dynamic is the losing struggle of the defense bureaucracy and armed forces in the Philippines to mitigate President Duterte’s worst impulses.

The abrogation of the VFA in mid-August will be enormously damaging to both Philippine national security and U.S. deterrence in the South China Sea (not to mention counterterror cooperation and disaster relief efforts). The chances of preventing that were already slim; they’re now vanishingly small given the cancellation of so many high-level interactions and preoccupation with the coronavirus. So now it is about salvaging as much as possible through ad hoc arrangements until 2022, when Duterte leaves office and effective alliance management and a real South China Sea strategy might be possible again.

With respect to diplomatic pathways in the South China Sea, we’ve seen a mix of negotiations between claimant states going on previously, be it bilateral talks between China and the Philippines on energy exploration or the pursuit of an elusive ASEAN-China Code of Conduct (COC). How do you see these pathways evolving in 2020, and are there some particular aspects that we should be attentive to?

There are probably three diplomatic tracks worth paying attention to.

First, the ASEAN-China COC negotiations which continue to shuffle forward zombie-like without any real progress. Negotiators will tell you that everyone, especially China, has been more polite and productive over the last few sessions (following some fireworks driven by Vietnam’s frustrations). But they still haven’t tackled any of the issues that killed the original COC attempt two decades ago. The COC remains a way for Beijing to stall while it kicks its neighbors around, and for the nonclaimants to pay homage to ASEAN centrality at the cost of real progress.

The second track is the bilateral consultative mechanisms, especially that between Manila and Beijing. The MOU on joint exploration for oil and gas signed by Xi and Duterte in October 2018 set a one-year goal for a final deal. That didn’t happen because, as was clear at the time, they were talking about two wildly different models. As with the COC, putting off all the hard discussions for the sake of claiming “progress” eventually leads to an impasse. Now Duterte is too invested to walk away, but it’s hard to see how Manila can actually revive the talks without acceding to Chinese demands that are legally and politically unacceptable in the Philippines.

Get first-read access to major articles yet to be released, as well as links to thought-provoking commentaries and in-depth articles from our Asia-Pacific correspondents.

Third is the dark horse: will Vietnam get so fed up with the continued failures of the COC progress amid increasing Chinese bullying that it pursues a parallel diplomatic option, either with fellow claimants or through an external mechanism like UNCLOS conciliation or arbitration procedures? Unlikely, but repeats of last year’s oil and gas standoff (which seems like it might be brewing at this moment) or a loss of life due to another collision could alter the calculus of decision makers.

Looking ahead to the rest of 2020 and on, what are some key signposts and indicators that you will be looking at to assess the evolving situation in the South China Sea?

I’ll be watching for shocks and how Southeast Asian states respond. China has now put so many actors in play and given them carte blanche to behave aggressively that incidents like [the April 2] sinking of the Vietnamese fishing boat or of the Gem-Ver at Reed Bank last June are inevitable. Sooner or later that will result in a loss of life which will create a significant demand for action from Southeast Asian government in question.

The other thing to watch is the slow strangulation of Malaysian and Vietnamese oil and gas operations in the area. China’s ongoing harassment is making it prohibitively risky and expensive for Hanoi and Kuala Lumpur to keep this up. What happens if Petronas — the Malaysian government’s cash cow — has to pull the plug on important projects off Sarawak? How does Hanoi respond if (and more likely when) Exxon pulls out of the Blue Whale project or Rosneft seeks to offload the Nam Con Son project? These are tangible and significant costs that political elites, at least outside of Vietnam, don’t seem to be giving much thought.