Ice fishing continues inland around Chicago while on the southern Lake Michigan lakefront there’s scattered perch and coho, with some lakers, steelhead and browns, too, for this sprawling raw-fie Midwest Fishing Report.

Mark Groen messaged the photo above and this explanation from northwestern Wisconsin:

3 of the grandkids on this nothing better! Micah Abby and Maddie

South ice is unsafe or close to it, while north and west ice generally has a good base down that should hold well into the forecast cold snap next week.

Here is a recap of this past week’s fishing.

Area lakes- Ice was 3 1/2 to 4 inches of clear ice before the week ends storm. Bluegill were in a mid winter pattern hugging the bottom and being very negative. Spikes and waxies were the better option over plastics to entice biters. After the storms, shoreline ice has deteriorated. Base is down to 3-4 with slush and water on top. I would not recommend venturing out as this week’s forecast will not be making much ice.

Wood stuck out, with his signature cowboy hat, when I bumped into him over the years

I forgot to add if you do decide to venture out make sure you spud as you go and don’t travel alone. Ice varies depending on location.

More than one person mentioned spud bars in the last few days. Take it to heart, it’s that kind of ice.

Proprietor Greg Dickson at Triangle Sports and Marine in Antioch said, “Everybody is pretty pumped, at least they can go ice fishing. It is a beautiful time. Most hours are below freezing and the 7-inch pad [of ice] is substantial. We’re in pretty good shape here.’’

Arden Katz said, if you moved around and find the right spot at Nielsen’s Channel, you will find good bluegill with some crappie mixed in; he was fishing the front with red spikes on Tungsten jigs.

Tom Palmisano at Henry’s Sports and Bait said anglers are starting to get some perch off the Riverwalk.

Braidwood, Heidecke and LaSalle are closed for the season. 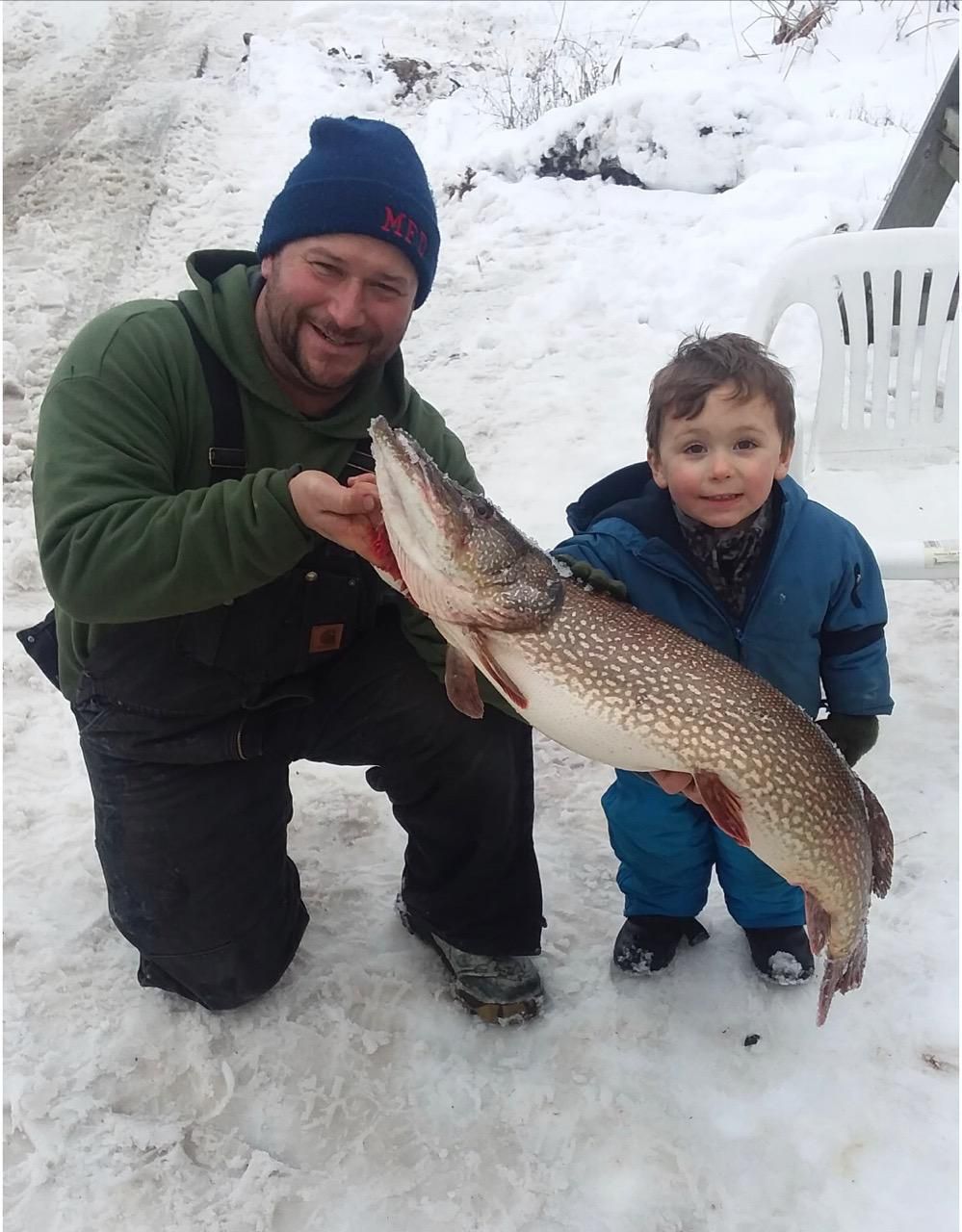 Guide Mike Norris texted the photo above, of August Hoffman and his son with a recent 38-inch Lake Puckaway northern pike, and emailed the report below:

Many of the lakes in my area of south-central Wisconsin are now completely froze over except for Big Green Lake, which is still wide open in the center of the lake. I advise caution though on driving vehicles on the ice on any of the lakes as I have found some areas of ice are thinner than other areas.

Little and Big Green Lakes – The Wisconsin DNR has been stocking walleyes every other year in Little Green Lake and the results are showing. Anglers setting out tip ups in water as shallow as 3 ft just before sunset are catching walleyes running between 15 to 20 inches in length. The bite is lasting throughout the night. A few larger walleyes are also being caught. I’m still waiting for ice to develop over the deeper water on Big Green Lake so I can get out to the cisco and lake trout spots.

Fox Lake – Panfishing is slow, but anglers fishing along weed edges in The Jug and Town Park areas just before nightfall are catching decent sized bluegills. Crappies are being caught on small jigs tipped with spikes in the main lake basin. The best bite right now is for northern pike. Anglers setting out tip ups for pike in The Jug and the Government Area are getting numerous bites.

Lake Puckaway – Both northern pike and walleye fishing with tip ups was good this past week. A 43-inch pike and several walleyes in the 26-inch range were registered this past Saturday on Puckaway during the annual Lion’s Club Fisheree. Anglers are also catching perch up to 11 inches jigging with small spoons tipped with minnow heads. A few fishermen are starting to drive on the lake, but I advise caution as some current areas still have thin ice.

Lance LaVine at Howie’s Tackle in Sturgeon Bay emailed this:

Good morning fellas! Here is a quick update on the fishing and ice conditions in our area

I have to start off the report by saying that the ice conditions really vary throughout the county pending on where you are at and where you intend to go. With that said, all visiting fishermen to the area should really do some homework before heading out there. Make some phone calls, hire a guide and at the very least bring a chisel and check ice prior to heading out on the ice. As for the overall ice thickness throughout the county….it ranges from 4 to 11 inches according to recent local guide reports and even less around certain shove lines and deeper water areas.

The near shore Whitefish action has been very good overall especially for the folks that are staying away from the high traffic areas and away from the larger groups of fishermen. The best depths have been ranging from as shallow as 8 feet of water out to that 40-50 foot range relatively near to shore. Best baits have been an assortment of jigs tipped with minnow pieces, wax worms, spikes and or soft plastics and a lot of folks run some kind of slider hook like a plain red hook or dry fly

Perch fishing can be classed as good. Again, you can really enhance your action by staying away from other fishermen and staying quiet especially since most of the Perch fishing is being done in the shallow bays. Those bays include…Little Sturgeon, Riley’s Bay and Sawyer Harbor where the ice is the most safe. An assortment of jigs tipped with minnows and minnow pieces, waxies and spikes have been working along with suspending Rosy Reds and shiners under tip ups

The Walleye fishing has actually been going pretty good according to the fishermen that have been reporting in. We’ve had reports coming from the southern bay down around the Bayshore Park area up to Henderson’s Point, the Riley’s Bay area and around Sherwood Point. Again, you really need to check the ice before venturing out to your favorite Walleye spots because the ice really varies. Rippin Raps and Slab Raps have been good along with Rapala jigs, Shiver minnows and OddBall jigs tipped with minnows still the go to baits

Pike fishing has been very good overall throughout the county. Areas include…Downtown Sturgeon Bay, Sawyer Harbor, Riley’s Bay can be good and the Little Sturgeon area has been pretty good especially on the quiet traffic days. Golden Shiners suspended under tip ups and auto fishermen has been the method of choice.

I would take the caution for out-towners to heart if headed north.

As Tom Palmisano at Henry’s Sports and Bait noted, perch are starting in the Chicago River, that also usually means that they are or will be starting in DuSable Harbor, too. There’s still decent perch being caught by boaters in Calumet system; shore fishing the South Side slips remains spotty. Otherwise, there’s still the occasion steelhead, pike and brown.

Click here for the D&S Bait update. The first “Badger Battle on the Bay” is Saturday on Monona, click here for details.

Any ice fishing, dicey at best on most lakes, is at your own risk.

Two and a half days of continuous, light, warm snow (yes, it was), have added a new layer of messy slush to our lakes, making travel not so fun!

With some lakes experiencing 4-8”+ of water to the ice surface, slush is causing issues for snowmobiles, ATV’s and UTV’s. Looks like any hope of enough good ice for truck travel will be out of the question this year.

Northern Pike: Good-Very Good – Nice fish up to 34”+ caught over the weekend as Pike action picked up. Big shiners or suckers as the usual, anglers say lots of “full bellies” on the Pike they caught proving that the “feed” was on!

Walleye: Good-Very Good – Not everywhere and all the time, but when the window opened up, good reports of anglers icing lots of Walleyes to 28” using suckers on tip-ups on the top of ledges. Bites lasting only 45 minutes to an hour, by most accounts from 4:30 pm-5:30pm had flags flying. One group reporting fish in as little as 7’ using Slender Spoons and minnow heads.

Crappies: Good-Very Good – Like the Walleye bite, very time and location oriented. Tip-downs with minnow best as warm temps seemed to “heat up” bite. Rockers tipped with Beaver Tail or white or silver plastics working. Some areas in 8-12’ tall weeds while others (even on the same lakes) were found over mud in 18-22’.

Yellow Perch: Fair-Good – Lots of little “dinks” being caught around weeds and mud flats of 12-15’. Better fish over deeper mud of 16-22’ on Halis, Flasch Champs and Pimples tipped with wigglers.

With the coming week seeing temps in the upper 20’s to mid 30’s, don’t see any relief from slush. We need very warm (mid 40’s+) or very cold (-20 or below) and neither is on the horizon. Be prepared to have to walk to most areas, though lighter snowmobiles and tracked ATV’s/UTV’s still getting around. It was definitely worse in February last year, but not nearly as nice as conditions just last week. 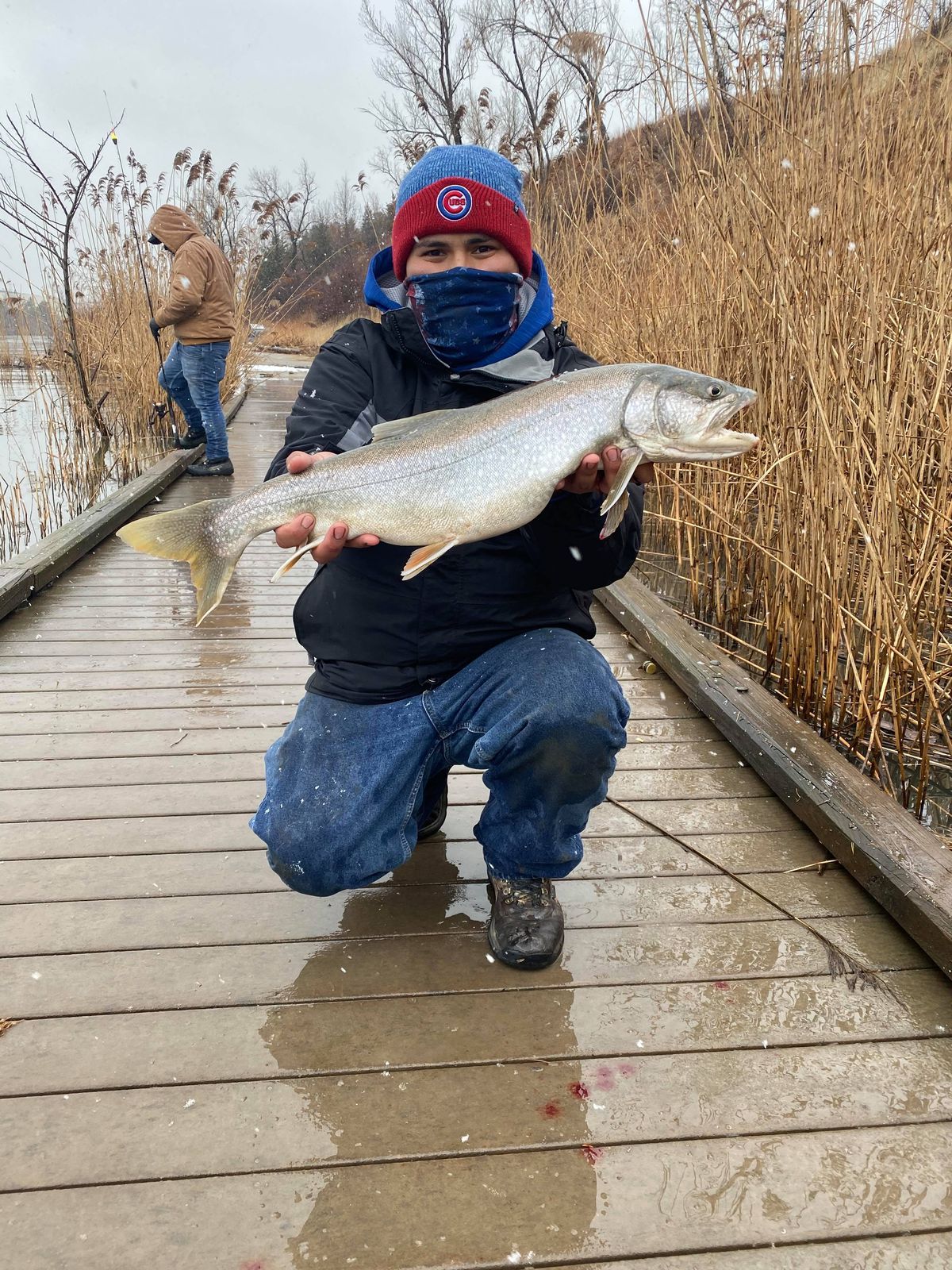 Adrian Medina with his first lake trout, caught from shore in Indiana.Provided

Adrian Medina messaged the photo above from Saturday and this report:

Hey dale fished Indiana today for some cohos using a bobber and jig and I got this laker !! My first ever laker

Laker on a bobber fishing only 5 1/2ft deep

OK, that last sentence restores some of my faith that at least some ice anglers are using proper caution in these conditions

Click here for the Wisconsin DNR’s report, usually on Tuesday or Wednesday.

Staff at Tackle Haven in Benton Harbor said there were some coho early Tuesday off the pier and there’s been a few whitefissh; a few walleye are being caught at Berrien Springs and a few steelhead in the river.

Clint Sands at Lakeside said some nice crappie and catfish are being caught; there is 5-6 inches of ice but there is one open hole remaining in front of the boat rental.

Lakeside will not reopen until open water. Park hours are 8 a.m.-5 p.m.

Click here for the southern Lake Michigan reports from the Wisconsin DNR.

I did hear some good reports of pike on wolf lake. Take care

Most of the guys I talk to stopped fishing because of too much water on the ice. Warm weather will last through the weekend, then turn cold. Remember, groundhog season opens Saturday, we need an early spring