Science|They’re Stealthy at Sea, but They Can’t Hide From the Albatross

Researchers outfitted 169 seabirds with radar detectors to pinpoint vessels that had turned off their transponders. 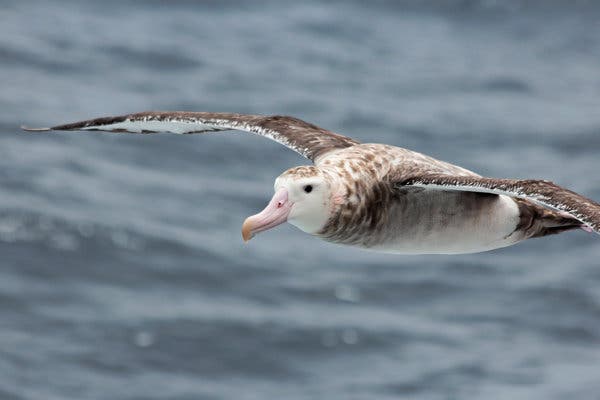 Albatrosses tracking fishing vessels found that 28 percent of ships had turned off their equipment, possibly fishing without a license or transferring illegal catches onto cargo vessels.Credit…Alexandre Corbeau

There’s a lot of ocean out there, and boats engaging in illegal fishing or human trafficking have good reason to hide.

But even the stealthiest vessels — the ones that turn off their transponders — aren’t completely invisible: Albatrosses, outfitted with radar detectors, can spot them, new research has shown. And a lot of ships may be trying to disappear. Roughly a third of vessels in the Southern Indian Ocean were not broadcasting their whereabouts, the bird patrol revealed.

Albatrosses are ideal sentinels of the open ocean, said Henri Weimerskirch, a marine ecologist at a French National Center for Scientific Research in Chizé, France, and the lead author of the new study published on Monday in Proceedings of the National Academy of Sciences. “They are large birds, they travel over huge distances and they are very attracted by fishing vessels.”

Dr. Weimerskirch and his colleagues visited albatross breeding colonies on the Amsterdam, Crozet and Kerguelen Islands, French outposts in the Southern Indian Ocean. The team attached roughly two-ounce data loggers to 169 adult and juvenile birds. The equipment consisted of a GPS antenna, a radar detector and an antenna for transmitting data to a constellation of satellites.

It took two people about 10 minutes to tape one of the solar-powered loggers onto the back feathers of an albatross. Despite the birds’ size — the largest one the researchers handled tipped the scale at 26 pounds — they were “very easy” to work with, said Dr. Weimerskirch.

From November 2018 through May 2019, the researchers watched as breeding adults foraged at sea for 10 to 15 days at a time, flying thousands of miles per trip, and as juveniles left the colony. The birds traversed a total area of roughly 18 million square miles, about five times the size of the United States, always on the lookout for radar signals.

Fishing boats are regularly in those waters, seeking tuna and Patagonian toothfish — otherwise known as Chilean sea bass — that frequent areas near the islands.

The feathery dragnet recorded radar blips from 353 vessels, which used radar to navigate and detect other boats. But only 253 of the boats had their Automatic Identification System transponder turned on, which broadcasts a ship’s identity, position, course, speed and other information, as required by International Maritime Organization regulations. One hundred ships, or 28 percent, were silent.

They might have been fishing without a license or transferring illegal catches onto cargo vessels, Dr. Weimerskirch said. “A lot of fishing boats prefer not to be located.”

When the researchers looked only at boats in international waters, they found an even higher percentage (37 percent) of stealth vessels. There have been no previous estimates of boats evading detection, Dr. Weimerskirch said. “It’s a surprise that the number is so high.”

These observations can help government officials pinpoint suspicious vessels, the team suggested, because both the birds’ radar detections and Automatic Identification System information can be downloaded nearly in real time.

It’s unlikely that albatrosses would be harmed while they’re doing duty as ocean sentinels, Dr. Weimerskirch said. Crew members seeking to shoot the birds would have a hard time because albatrosses typically remain hundreds or even thousands of feet away from vessels. That distance, combined with the rough seas of the Southern Indian Ocean, makes it unlikely that a shot would hit a bird, he said.

Daniel Pauly, a fisheries biologist at the University of British Columbia who was not involved in the research, said the use of the technology was a “real achievement.”

Dr. Weimerskirch and his colleagues are planning similar investigations in places like New Zealand, Hawaii and South Georgia, an island in the South Atlantic. They hope to show that other species of seabirds, like petrels, can also be ocean sentinels.

The first step is to make the equipment smaller, Dr. Weimerskirch said. “We’re working on miniaturizing the loggers.”