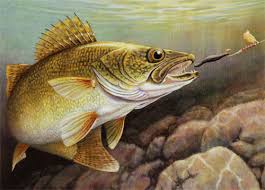 Leeches are the most plentiful of all walleye baits.

They are natural to all bodies of water including ponds, creeks, marshes, streams,rivers and lakes. When using leeches for walleye it’s important that the right size hook is used for the size of the leech that you are using. In general, the smaller the bait the smaller the hook! However, when using leaches, a larger hook is best. When a walleye grabs a leech it will roll up in a ball, frequently around the hook. It is also important to remember to set the hook harder when using leeches, as you have to drive the point of the hook through the leech first and then into the fish. Hook the leech through the sucker end of the leech for float-fishing. This is actually the leech’s tail, contrary to what many novice walleye fisherman believe. That will cause the leech to swim away from the hook in an enticing manner.

All leeches have sucking disks at both ends. The mouth is located in the smaller disk at the head end.
Leeches use the larger disk on the tail only for clinging to objects. Most leeches eat dead animals. Some species such as the horse leech digest the skin of live animals and feed on the tissue. A few kinds, such as the medicine leech, are called bloodsuckers. They have jaws which actually cut through skin to reach blood vessels and tissue. Not all kinds of leeches attract fish. The leech species that live in
waters with game fish populations usually make poor bait. Most game fish ignore horse leeches. Either the scent of the horse leech repels fish or it lacks the action of bait leeches. Fish eat many types of leeches, but only the ribbon leech is widely used as bait. A few anglers have found tiger leeches to be good pan fish bait. A ribbon leech has a firmer body than a horse leech and body situations or grooves that are less pronounced. The color of a ribbon leeches varies from pure black to light brown. Some have a brown or olive background with many black spots.

Leeches are easy to keep alive. They are not as sensitive to temperature changes as minnows, and they require relatively little oxygen. They can be kept alive until fall, even without food, but they should be allowed to clean themselves. Leeches that develop a slim on them are in need of a place to clean themselves. Leeches that are held in stagnant water over long periods of time need to ride themselves
of waste and if they were in a stream or pond they would burrow into the sand to clean themselves. Many anglers leave their leeches in a plastic container in the refrigerator and find them in a slimy smelly mess. Finally fishing with leeches made easy with a new device from JNB Originals, the Leech Tamer. This device is a durable net bag that is porous and rough to the touch. It has a Velcro closure at the top and best of all it floats in your live well or bait well. Leeches have a place to rub against to clean themselves and they stay the same temperature as the water. The leech will not curl up, because of
temperature shock, and selection is easier plus it will give you more time to fish. The Leech Tamer can be stored in your refrigerator with a small pail or bowl of water or tied off the dock.

The summer is the best time to fish with leeches because their population is on the decline. By mid-summer most of the adult leeches have deposited cocoons and die off. When the leech enters the walleye’s environment they are usually attacked. Also, in the summer time the leech will wiggle more below a float than a worm. When drifting or trolling, anglers will catch suspended walleyes on floating jig heads and slip sinker rigs.

As you can plainly see the leech is a universal bait for Walleye.