Greg Hackney explains which baits he likes to use in each phase of the spawn. Photo by Jesse Schultz

No matter where you live in the country, this time of the year is the best time to catch big ones. March, April and May are the magic months for catching prespawners and spawners. I know that everyone has specific ways they like to catch them and what kind of baits they like to use, but I’m here to give you a few baits that I like to use in each specific stage of the spawn.

In my mind, there are two phases for prespawn. There’s the pre-prespawn—which is basically right out of winter—and then the prespawn. These two phases are going to be your best bet at catching your personal best. I like a Strike King Thunder Cricket, Strike King Red Eye Shad, a spinnerbait and a Strike King Hack Attack Swim Jig with a Rage Craw trailer.

The fish are going to be really aggressive when they first come up shallow to start to set up. The fish want a big, slow-moving bait this time of the year. They’re getting ready to spawn, and that causes a lot of stress for them.

The males are stressed because they’re guarding a huge territory. When he first gets up shallow, he’s roaming a big area and he’s really aggressive. That’s a time that I like to use a swim jig or a bladed jig. You can keep those baits in the strike area longer because of that. 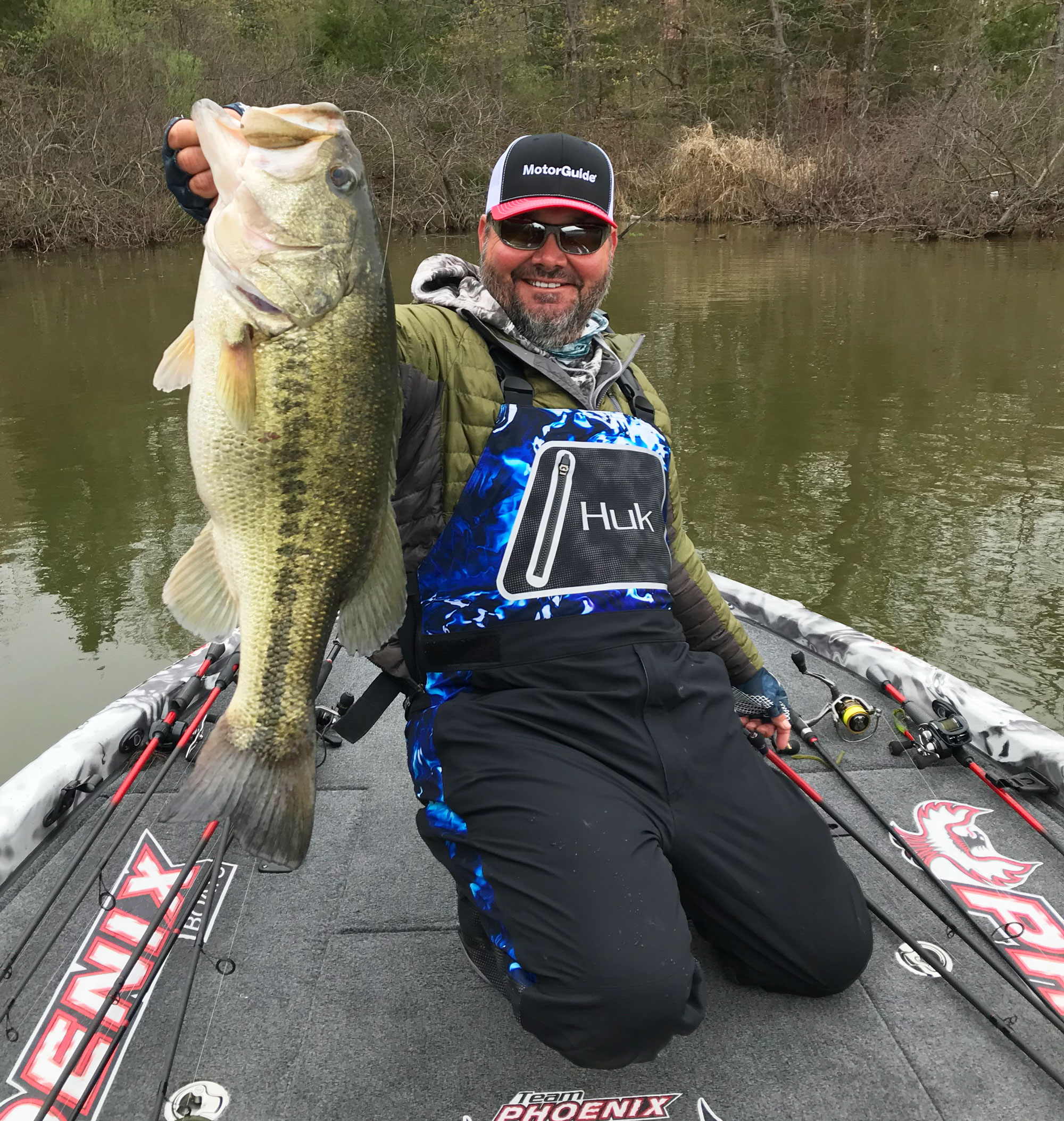 Greg Hackney landed this 8-12 at. Lake Fork during Stage Three of the Bass Pro Tour.

We were at Lake Fork for Stage Three of the Bass Pro Tour when the first wave of fish were heading to the bank to spawn. Those fish weren’t hard to catch, but they weren’t overly aggressive like they are in the prespawn phase. That’s why sight-fishing played such a big role on Lake Fork.

They weren’t hard to catch because you could see them. The hard part was that you would sometimes spend 20 minutes on one fish trying to get him to bite, making repetitive casts.

In my mind, nothing beats a piece of plastic at this time.

Two of my favorites to flip are a Strike King Flip-n-Tube and a Strike King Rodent. You want something that doesn’t have a lot of action. The only action those baits will have is whatever action you give it with your rod tip. Just be patient and make repetitive casts right up next to that bedding bass. They’ll bite it eventually.

Once the water starts to warm up and you get past that first wave of spawners, the fish will begin to get a bit more aggressive. When the water temperature gets up into the 70s, that’s when I like something with appendages that swims like a Strike King Game Hawg or Rage Bug. It seems that those fish pay more attention to a bait that swims once the water warms up.

I get a lot of bites flipping around cover where I think they are bedding. They grab it when I’m reeling it back in. During this time, both fish are still there on the bed. That’s how you know you’re not completely done with the spawning period.

Tail End of the Spawn

This is when you have the males that are guarding the fry. This is the time when that swim jig comes back into play. The bass are not guarding their bed on the bottom anymore, so that’s not where you need to be aiming. Your focus should be on the upper levels of the water column.

It is the male bass’ job to protect those fry from bluegill and other fish that want to eat his babies. So, if you drag a swim jig through his area that has his school of fry in there, he’s going to attack it. I prefer something that’s going to stay up in that water column like a swim jig, a Strike King Popping Perch, any type of frog or a wacky-rigged Strike King Ocho.

The female bass during this time are a totally different animal. This is when I reach for my flippin’ jig. I have found, especially in the south, that the females like to bunch up after they’re all done spawning. When you find one female, you’ll find a group of them.

Here in Louisiana, our natural lakes have a million cypress trees. When you find the right group, there will be a female bass on every single cypress tree in that area. In a place like Lake Guntersville, I know they like to bunch up on shallow bars in the river. I like to use a topwater around those groups because those females just seem to like it more.

Now, let me say this—you can still catch a fish on any of these baits during any point in the spawning process. I’m just here advising what I use to get the most bites during each stage. I encourage you to find what works best for you on your home lake, but give these baits a try if you’re looking for something new.