The warmest water always points to the greatest concentrations of crappie, bluegills & more.

During warming trends, the finest panfish spots tend to be in 5 feet of water or less near vertical cover. (Photo by Matt Straw)

Panfish are, by definition, “warm-water species.” And all species so designated tend to be very sensitive to temperature changes at the cold end of the spectrum. This means, early on, the most critical equipment on your boat is a temperature gauge. Like a compass needle that always points north, the warmest water always points to concentrations of panfish in spring.

Panfish move shallow at some predictable point. Up North, it’s right after “ice-out.” Where lakes never freeze, day length or water temperature might trigger it. The first places to attract panfish will be the warmest water available. Often, it’s found in the back end of canals, the north side of bays, river backwaters or in confined nooks that experience more than average amounts of sunlight or are protected from wind, and therefore warm quicker than the rest of the lake.

When water temperatures on top read anywhere from 38 degrees F to about 58 degrees F, crappies and bluegills are most likely to relocate when temperatures drop. Even a drop of 1 degree can push crappies to find warmer water at the low end of that range (about 38 to 48 degrees). Conversely, even if the warmest water in a bay is only 1 degree different, it might hold every panfish in the area. If big winds push currents carrying cold water into those bays, backwaters, canals and nooks, time to mount up, cruise around and find out where the warmest water went. 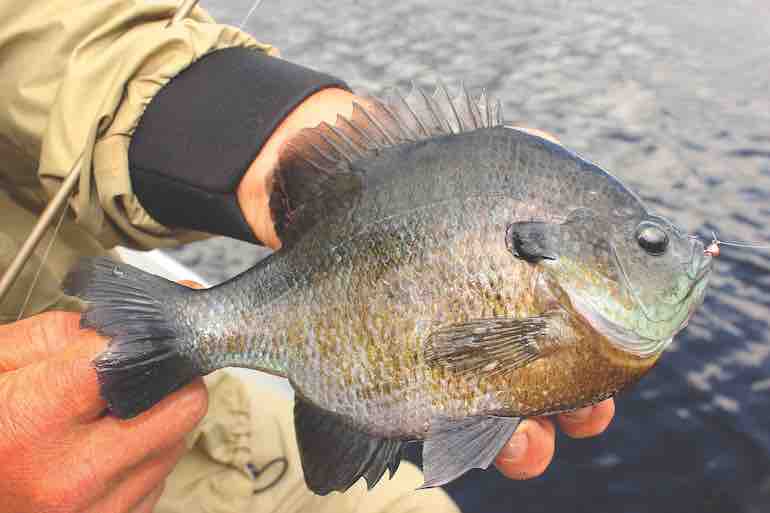 Bull bluegills get big by finding something to eat early in the spring. To do that, they head for warm water. (Photo by Matt Straw)

Lakes, rivers and reservoirs cool almost every night in early spring. The overall effect is a gain in temperature as days become longer than nights, but every night the water chills and radiates away some of the heat gained during the day. Severe cold fronts might make temperatures drop even during daylight hours. Snow, cold rain and heavy cloud cover can drive temperatures down. If the weather is severe enough, panfish might drop back down into wintering areas.

During warming trends, the finest panfish spots tend to be in 5 feet of water or less near a fallen tree, brushpile, reed bed or some other vertical-cover scenario. Just finding shallow cover isn’t the key, however.

Big springtime slabs and “bulls” milling all over the place. Right here. Yesterday afternoon. But now they’re gone. Happens to anybody who fishes panfish long enough. It’s not the spot that counts. It’s the temperature. And predicting where that warmer water might be is relatively easy.

Searching for warm water begins with wind history. If winds have been light and the days sunny, warm water will pile up on windward shores. If winds have been strong and the days cloudy, temperatures will be higher on the lee side. In perfectly calm weather, always start on the north side of a lake, bay, reservoir or backwater. Sunlight hits the water for a longer period of time there. 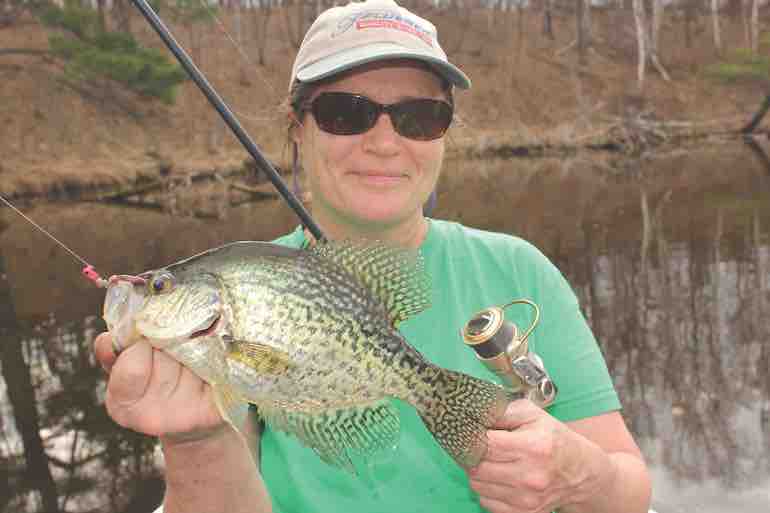 Crappies will move to the back of protected coves near cover to find the warmest water.(Photo by Matt Straw)

South-facing enclosures with dark bottoms are solar collectors. Dark substrates like silt and muck absorb and radiate the most heat. Plankton and insects will be most active and prolific in these areas. But just because a spot warms faster doesn’t mean the warm water will stay there. Winds and convection currents may move it elsewhere.

Cover in a semi-enclosed or entirely enclosed area with a small channel leading to it tends to produce consistently well. Bays, river backwaters, small connected basins and partially enclosed bays tend to be the most stable environments for panfish in spring. If spots like that don’t exist, they might use boat channels leading into housing developments, marinas or little nooks and crannies along a northern shoreline—anyplace that gathers sunlight and negates the cooling effect of wind and current. The fewer directions wind can take to reach them the better because wind can cool an area off even when sunlight is warming the lake overall.

If the water seems to be 48 to 49 degrees everywhere, keep looking. The right spots can be small. Passing through zones where the wind is blowing offshore, the gauge might read 47 degrees. Even if the hottest crappie bite ever took place there yesterday, it probably won’t be happening there today. Head to the opposite shore. 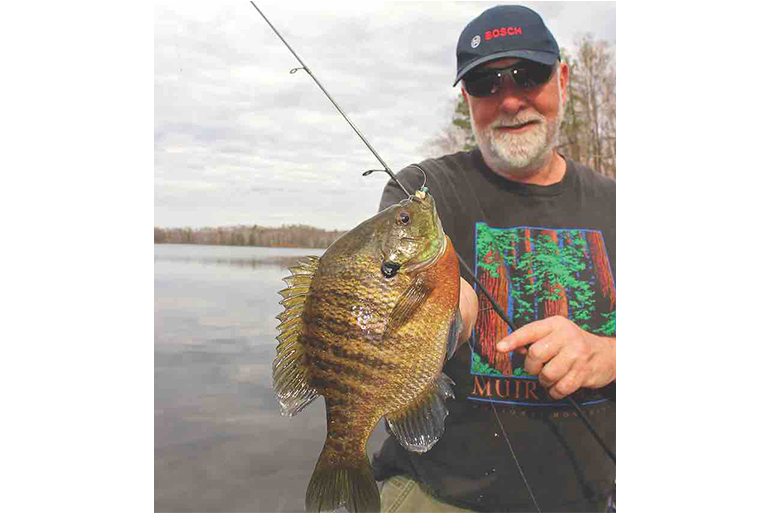 The bigger the fish, the better the warm-water pattern works. (Photo by Matt Straw)

When winds are really strong, colder subsurface water is pulled to the top. Here, the warmest areas tend to be wind-protected spots, where the wind is blowing offshore and sunlight has time to warm the surface. Or warm water will collect in eddy areas, where the wind sweeps along a shoreline and current swirls around a shoreline point, the tip of an island or opening to a bay, dumping warmer water into that calmer spot. If wind is heavy, search calm spots first, starting with areas having the most sun exposure for the longest periods during the day.

Water everywhere reads 46 to 48 degrees. Suddenly, the temp readout on the sonar screen reads 50. Time to bait up. The earliest panfish respond best to baits suspended under a float. It just sits there and lets them sidle up slowly for what appears to be an easy meal. Where concentrations of panfish are dense, an un-baited marabou jig might be the ticket. Most days—especially tough days during uncertain and unstable weather—the jig needs to be sweetened with a tiny minnow, wax worm, maggot or bitty Berkley Gulp panfish bait.

The line should be braid. It floats. A 4-pound braid like Berkley FireLine with a 4-pound Seaguar or Raven fluorocarbon leader, attached to a small barrel swivel, allows for long casts with a quality 7- to 8-foot St. Croix Panfish Series or G. Loomis ultralight rod.

No biters right away? Look at the waves. Keep the trolling motor going and work toward a curve in the shoreline, a point or a cup where the waves are beating in most directly, keeping an eye on the temperature gauge. Where it hits 51 degrees, slow down and fish a little harder, but keep moving. The temperature might read 52 on the other side of a point or a little farther up the shoreline. If that’s the warmest water available, all the active crappies in the area could be crowded into a small zone defined by that water temperature. 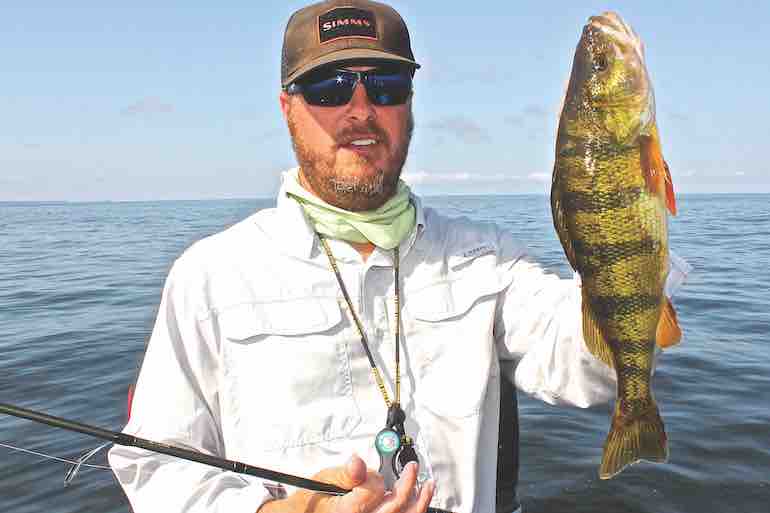 Temperature is less crucial with perch, a cool-water species. They spawn in waters near 50 degrees. Check out old weed or reed stalks. (Photo by Matt Straw)

In reservoirs, crappies move to the back one third of creek arms and inhabit shallow flats. Finding an area that’s 2 degrees warmer than the rest of the arm tends to be far more important than simply making the rounds to cover all the brushpiles, stake beds and fallen trees one at a time. Consider the wind history of the past few days and note the current wind direction before determining which shoreline to cover first. This is especially true in water temperatures below 60 degrees. In all environments, small increases become less of a compass in water over 60, but differentials of 6 degrees might still determine where all the fish will be located.

The compass is your temperature gauge—the most important locational tool on the boat in spring. Find the warmest water available in whatever micro-environment the crappies are in, whether it’s a creek arm, a bay or a series of canals. All the active panfish available will be there on the toughest days. And the bigger the fish, the better the warm-water pattern works.

A fixed float, as opposed to a slip-float, can be a great choice this time of year. The Double X Tackle (formerly Rainbow Plastics) A-Just-A-Bubble is made of dense plastic and casts like a bullet, yet it slips under easily on the bite. Light bites make the thin end of the A-Just-A-Bubble pop straight up if rigged with the thick end of the float toward the jig. 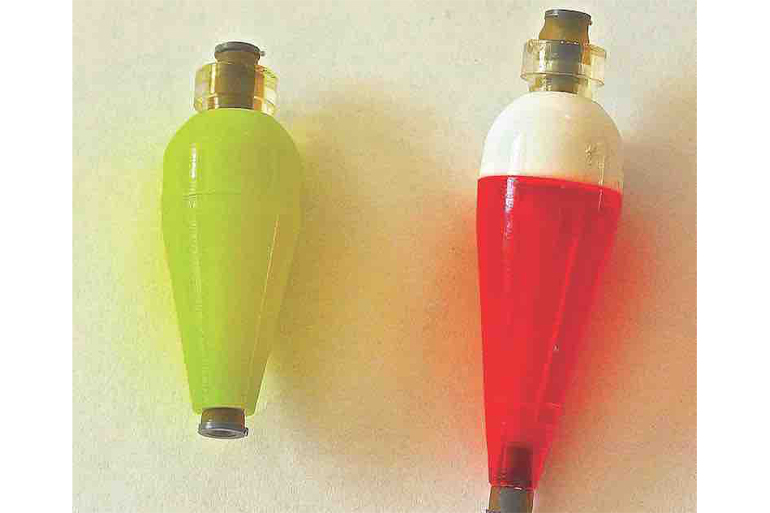 Surgical tubing runs through the center of the float. Line passes through the tubing, then the cap is turned to twist the tubing and grip the line—just secure enough to keep it from slipping but not so tight you can’t slide it on the line to adjust depth.

The tactical advantage of this float is the fact that no sinkers are required. The slow sink of a tiny, baited or marabou jig (1/80- to 1/64-ounce) from the surface all the way to the end of the leader is a dynamic trigger in cold water. Slip-floats—great for fishing around wood cover and weeds later in the season—require sinkers. A quick plummet can actually spook panfish in cold water.