Tips and Tactics For Catching Northern Pike On Mid-Winter Ice 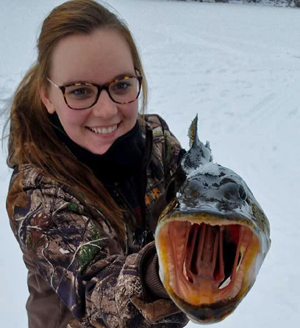 Ask most Northern Pike enthusiasts about winter fishing and you’re likely to hear a lot about the strategy for catching or spearing them during the early season. Pike devotees are always the first to arrive on the ice when it is scarcely thick enough to support their own weight, let alone a spear house. But they know the secret; Pike fishing during winter is all about location and the relationship between the Pike and their food.

In early season, larger Pike remain in the shallows as long as the fall spawning species like Tulibee and/or Whitefish inhabit the flats and adjacent drop-off areas. This soft body, high calorie fish provide the sort of super-size meal that large Pike will seek out. So this is one key reason why savvy Pike anglers are willing to risk life and limb in a big rush to get their spearing shacks set up on thin ice. Many of them know that they need to get there before the prime food source leaves the area and larger Pike follow the forage out to deep water.

For a lot of winter anglers the story ends here as the pike move out. They switch over to fishing for crappies, perch or walleye. If that’s the way you like it, great! But if you’d rather chase big pike, and you’re willing to make a move, you can stick with these pike as they move into mid-winter territory.

Let’s say that you’re not a die hard pike angler and don’t risk moving onto thin ice during the early season. Then before you start packing up all of your gear and rush out the door, headed for Lake Pickledpike, let’s pause for a moment.

Before you preapare to fish, the one crucial judgement about where to pursue big pike lies in knowing whether or not your lake actually contains larger Pike or not. All lakes are not created equal and pike living in lakes with prime habitat and premium forage have the ability to grow large and do it fast. In many, if not most lakes in the Midwest, pike do not enjoy fast growth rates because they are over-crowded. In many cases lakes have so much habitat that they produce more fish than the lake will support.

In other words, if your goal is action, and not size, then you probably already know about a handful of lakes that fit the bill. But, if your goal is to locate larger fish, do a little research first. Paying close attention up front to both the forage species available and size structure of the pike in a lake will pay off big time when you start fishing it. I know it’s counter intuitive, but your chances for catching larger pike may actually occur in lakes that provide less ideal habitat and are home to much smaller pike populations.

Lake information sections on DNR websites can give you a jump start by providing data about population densities, size structure and available forage. They allow you to make an educated guess about lakes that have potential to be “good” for big pike. 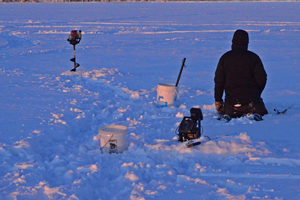 On the lake, you will have to fine tune pike locations based on the habits of their primary food sources. Forage that your lake has available greatly influences where the majority of large pike will reside. Pike that feed on Tulibee and Whitefish are likely to spend a lot of time over open water. Pike also feed heavily on Crappies and Suckers and these species could be found near deep weed beds and steep shoreline breaks. So knowing the feeding and locational habits of a pike’s forage is equal to learning the pike’s own feeding habits.

Knowing that many of the pike’s preferred forage fish will move into deeper water during mid-winter gives you a distinct advantage. Locating structure adjacent to deep-water holes with soft bottom content usually provide the makings of a good Pike fishing spot.

Deep holes tend to concentrate insect larvae that in turn attract small minnows and then larger forage species like Tulibee, whitefish, suckers and crappies. With the proper food chain in place, we’re ready to go right, just drill some holes and start fishing.

Not so fast; locating the Pike’s food source is just one piece of the puzzle. Understanding how Pike feed is the next important part of the puzzle.
Pike are ambush feeders and they definitely will lay in wait for unsuspecting forage to swim into their strike range. The term “ambush” suggests that they sit still though and that’s not always the case. Pike will patrol steep breaklines along mid-lake structures where schools of forage fish travel. Positioning themselves in strategic locations along the steep breaks, they attack unsuspecting forage when they roam into range.

Sharp points, rock piles and sunken branches found along these steep structures provide even better ambush spots and pike will use them to their advantage when available.

For me, sharp breaklines are the best starting points not only because I know that patrolling fish will eventually move through, but also because they are so easy to locate and figure out. I simply take a look at my map and single out some sections where the breaklines are the steepest.

Once you’ve picked a couple of good-looking areas, it’s time to get started. 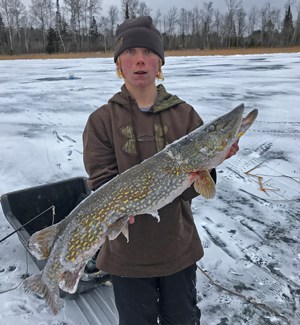 I don’t mind the idea of drilling lots of holes, but I do want them to be drilled in the highest percentage areas possible. I drill a series of holes along a small stretch of the drop-off locating several of them out over the deep water, some of them right on the breakline and a few of them higher, up on top of the flat. It’s nice to be able to move from hole to hole, almost as if you were trolling along the drop off. But don’t get carried away, you don’t have to drill out the whole lake on your first pass. I cover 100, maybe 200 feet of breakline at a time and that allows me plenty of time to work a good area when I find it.

Fishing tackle and presentation isn’t all that complicated, but you should have least three basic rigs with you. First, a good tip up rigged with freeze resistant, coated line. I like to set mine up with a ½ ounce egg sinker that I slide directly on to the main line and then tie on a good snap swivel to use as a sinker stop. You can rig up a nearly bite-off proof leader using 17-pound test monofilament or better yet, one of the clear fluorocarbon lines. Tie on a 2/0 to 4/0 plain hook, then tie a loop on the open end and attach it to the snap swivel. You can use wire if you like, but it’s not as handy to work with and you’ll have to re-rig if a fish puts a kink in the steel.

Rig up one or maybe two spinning rods with 8 to 10 pound monofilament or fluorocarbon line. If you plan to fish inside a shelter, braided lines are nice, but fishing outside in cold weather, freezing causes too much trouble for me.

If you really like braided line but still plan to fish outside, you can slow down freezing problems by spraying your line with silicone line, the same dressing that the fly fisherman use. This helps shed water and reduces freezing (it also really makes the line spool out easy).

Use the same kind of mono leaders that I suggested for your tip up. You’ll want good live bait for the tip up. Large Golden Shiners, Creek Chubs, Suckers or Redtails will all work. I like to tail hook the minnow with the hook running parallel to the dorsal fin.

For the jigging rods, flashy spoons and jigs tipped with live bait will help you catch plenty of pike. I like lures that feature a lot of flash and Lindy’s ¼ ounce Quiver Spoon has tons of flash and falls slow too, allowing pike plenty of time to see and strike the bait. Another interesting innovation, the Wally Talker features glass beads that provide plenty of flash, but also creating a clacking sound that attracts fish with sound.

Another great jigging trick I’ve picked up from Lake Trout fishing is using a 3 to 4 inch White tube skirt with a ¼ or 3/8 ounce jig head stuffed inside. Pike like the erratic jigging action and the white color is also highly visible under the ice.

Jigging baits can be tipped with either a head or tail cut from a minnow. For this you could use just about anything you have on hand. Fatheads, shiners or even frozen minnows.

I always start by setting a tip-up first, positioning my bait about two feet off the bottom. Typically, the tip-up gets placed in one of the shallower holes up higher on the breakline. Once I have the tip-up set, I’ll grab one of the jigging rods and begin working the deeper holes.

As you experiment, stay reasonably close to where you set the tip-up, especially in Minnesota where there are restrictions on how far you’re allowed to wander from it.

Pike are curious, so jig aggressively anywhere from the bottom on up to about 5 feet below the surface. Allow the jig to rest occasionally giving fish time to stalk the lure before they strike. I’ve discovered that one great trick for triggering more strikes is to let the jig sit still for a while, and then give it one slight twitch before you start jigging again. Sometimes there’s a fish siting still, staring down your lure and that little twitch helps put ‘em over the edge.

I’ll bet that you’re ahead of me by now, I’m sure that you’ve already figured out that you simply move your setup from one hole to another as you “troll” down the breakline. When you find a “hot” area, linger for a while and when you don’t, keep on moving.

Incidentally, this is a great system for the kids because searching for the active fish keeps the whole family occupied all day long. For me, there’s something really neat about the enthusiasm of a youngster running toward a tip-up flag when it goes up; it’s a lot of fun.

There are Northern Pike lakes and then there are NORTHERN PIKE LAKES. The lakes that produce big pike have the magic combination of cool water, good cover and plenty of food for fish in every size range. Learn more about what a lake needs to grow big pike and where you can find them. Read Article >> Northern Pike, The Quest For Quality

Helping your fellow fishermen and women stay abreast of fishing conditions in your area is good for everybody and it’s easier than you think!
You don’t have to write a book, you don’t have to share your secret fishing spots and you don’t even have to mention your lake. But even a few words about general trends, seasonal patterns and local weather conditions can really help.
Fishing Reports Minnesota, the Facebook counterpart to this page is open to the public, so you can post your own fishing update or just share a photo of a nice catch. Be like me, become a duly deputized “Cub Reporter”, it’s good for fishing! Contact Us