The South Orkneys in the Southern Ocean are as remote as they are idyllic, a cluster of snow-capped islands surrounded by clear, iceberg-filled waters teeming with wildlife and mostly unspoiled by the impact of humankind. Penguins, seals and whales are just some of the species that can be found in this pristine corner of Antarctica – the world’s last great wilderness, and one of the planet’s final preserved frontiers.

The future of Antarctica impacts us all, not just its animal inhabitants or the smattering of scientists who work here. Climate change is already seeing parts of the continent hit unprecedented temperatures, warming at some of the fastest rates on earth. Melting ice and subsequent sea level rises will have devastating consequences; krill – small crustaceans found in the Southern Ocean fished on an industrial scale here – remove as much CO2 annually from the atmosphere as British households pump out. The science is clear: we must protect the Antarctic at all costs.

The marine ecosystem of this secluded location – hundreds of kilometres from its nearest neighbour – is being threatened by the secretive and risky practice of transhipment: a major loophole in the regulation of the international fishing industry, which keeps some of its most destructive and dangerous operations hidden from view.

Transhipment is the process by which cargo – whether fish, crew or supplies – are transferred between boats when tied together on the high seas. They occur when fishing ships hand over their catch to refrigerated cargo vessels known as reefers, allowing them to stay out at sea in action for longer in increasingly isolated areas with no need to return to port to unload. In exchange, reefers can resupply the boats they service with anything from replacement equipment to fuel, food and fishermen to keep the fishing vessel operational and afloat while maximising profits. Away from oversight and scrutiny, though, all manner of wrongdoing can occur, including human rights abuses and the environmentally catastrophic exploitation of the sea. 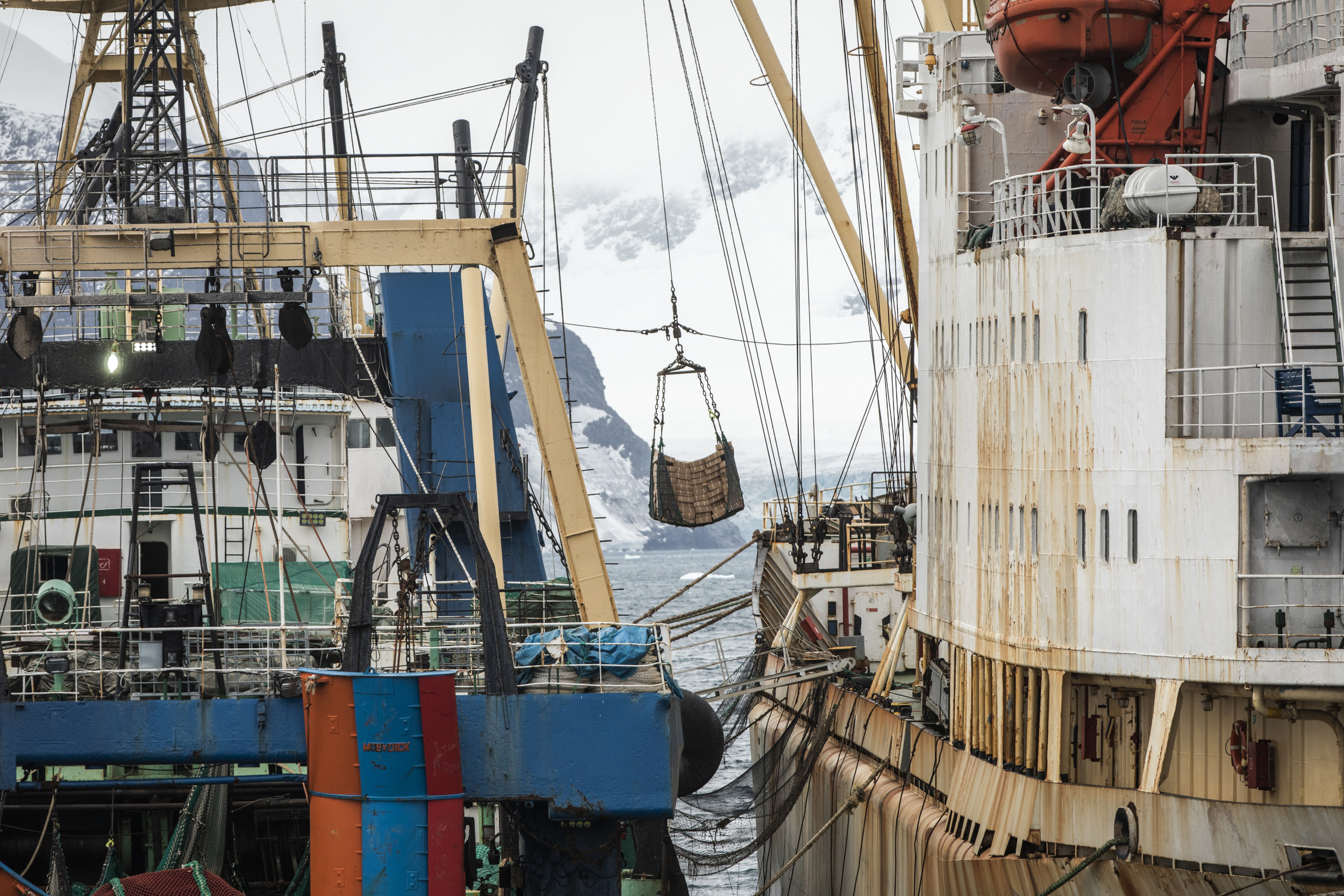 Krill are transferred from a fishing vessel, during a transhipment.

Right now, VICE is in the Antarctic on board the MV Esperanza, one of Greenpeace’s ships, on an expedition to investigate the impact of the fishing industry in its ice cold waters. Day and night, a team of Greenpeace’s investigators are glued to various maps, charts and live-tracking systems, keeping watch in an area where few ever venture. And today, in a groundbreaking new report compiled over three years, Greenpeace have attempted to uncover the extent to which this little understood process poses a risk to the oceans and the people working on them.

As the Greenpeace boat arrived to survey the South Orkneys earlier this week, three transhipments were in the midst of taking place. In choppy waters, boxes of krill were being transferred from one boat to another. Using data from Global Fishing Watch and research from a wide range of maritime sources, Greenpeace has developed a record of 416 “risky” reefer vessels operating on the high seas.

These boats were categorised as risky using a combination of factors, including geographical spread of operations, time spent on the high seas, ownership of vessels with a history of illegal, unreported and unregulated (IUU) fishing, periods of activity where no satellite tracking data was available, and visits to ports with low regulations. 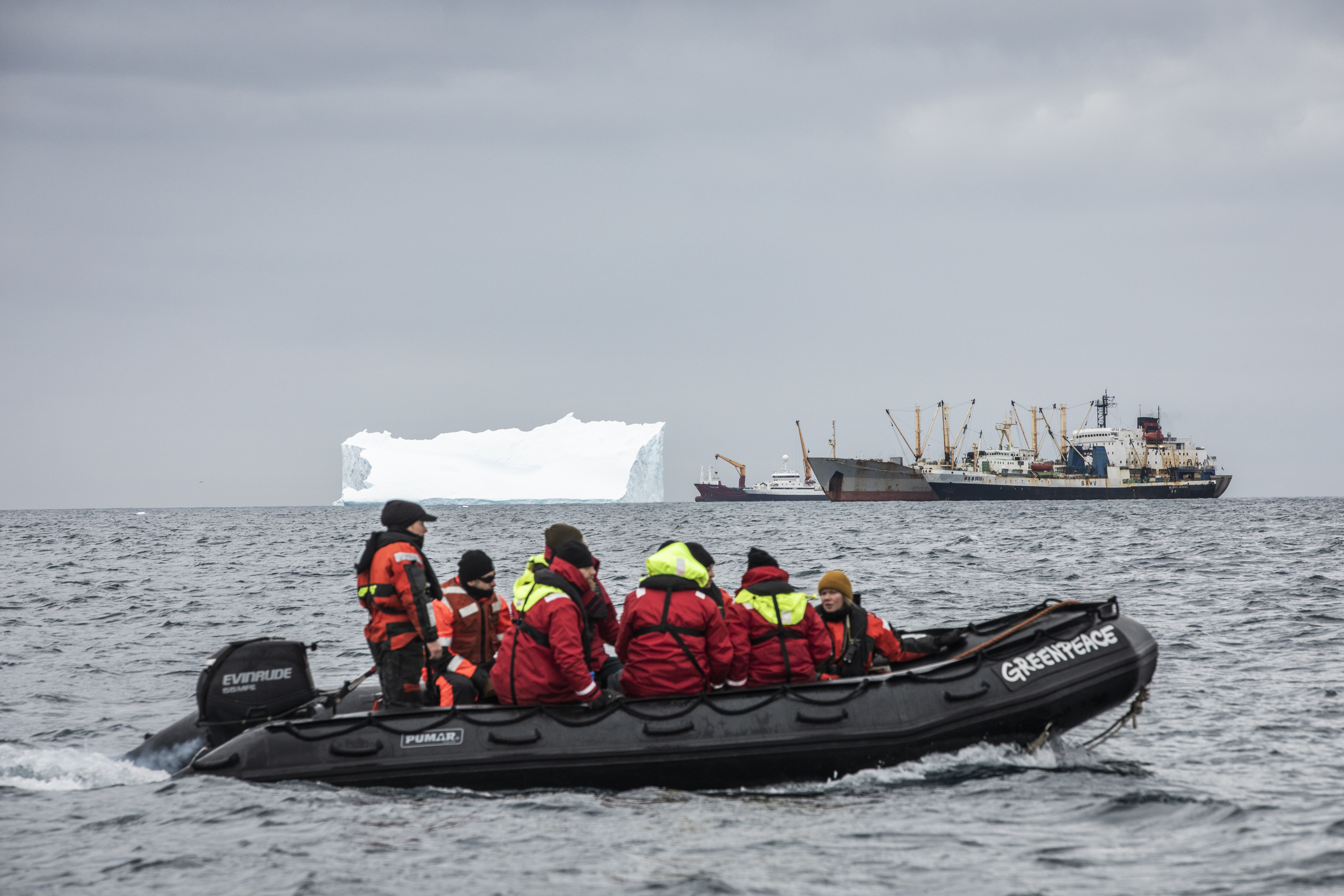 These vessels, they argue, pose a threat to our oceans by facilitating IUU fishing, estimated to be worth between $10 and $23.5 billion annually, representing 15 percent of the global catch. Illegal and unreported fishing takes place when boats violate state laws and regulations or international agreements designed to keep activity monitored and at sustainable levels. This could mean anything from the use of banned, environmentally harmful methods to overfishing or the catching of illegal species. And because illegal fishers do not report their catch, it’s impossible to keep track of stocks.

Unregulated fishing refers to activity in international waters – almost 45 percent of the planet – where there’s little regulation or enforcement. With no management, controls or oversight, there’s no protecting these oceans from total destruction. For this reason, the European Union has restricted all IUU fish within its borders.

It’s a system that also poses risks to the human rights of the workers on board. Many instances have been documented internationally of fishermen being forced to work exhausting shifts in unsafe conditions, having their pay withheld and documents confiscated, and even being denied access to clean drinking water. The transhipment process helps keep such cases covered up. Overfishing destabilises marine ecosystems and damages local economies, and transhipments enable entire fleets to operate out of sight, able to hide IUU catch.

In research seen by VICE, Greenpeace have revealed the extent to which – even in the protected oceans of the Antarctic – reefers with worrying records are engaging in transhipments. Antarctic waters, under the stewardship of the Commission for the Conservation of Antarctic Marine Living Resources (CCAMLR), purport to have some of the best fisheries management in the world, yet vessels with known health and safety infringements operate regularly, and evidence that Greenpeace has compiled suggests they may well have illegal, unreported or unregulated fish onboard. 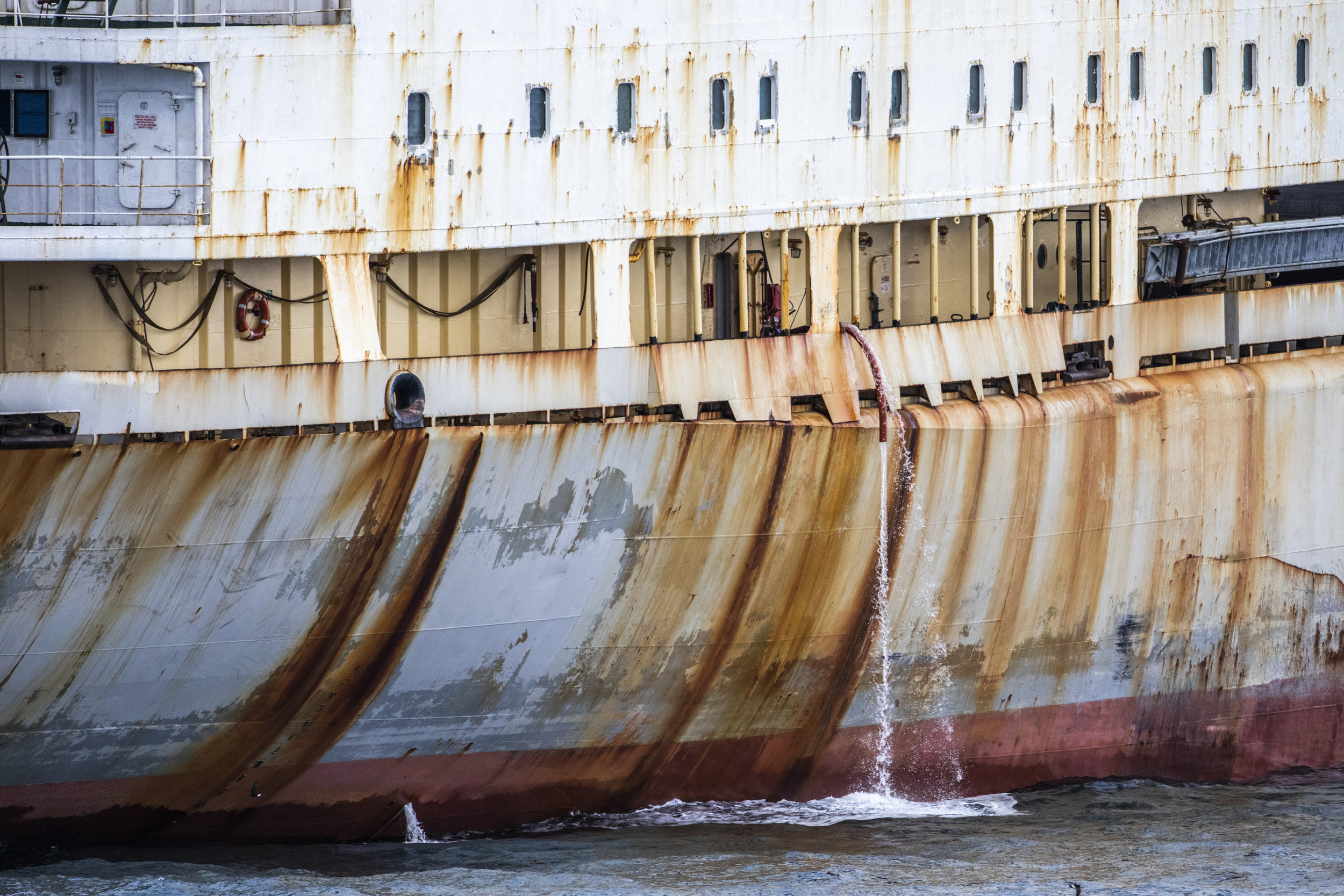 A total of 26 reefers have been operating within the Antarctic in the past three years, and in that time these vessels have been inspected by port authorities a total of 168 times. In at least 119 instances those inspections failed – a failure rate of 70 percent.

“The shocking environmental safety record of transhipment vessels in the Antarctic is a ticking time bomb,” Will McCallum of Greenpeace’s Protect the Oceans campaign told VICE. “If it’s left unchecked it could cause untold harm to this fragile ecosystem.”

In 2017 one reefer sunk after transhipping in the Antarctic. At 5AM local time on the 5th of May 2017, the boat sent out a distress call after colliding with ice. After reportedly continuing to take on water for two days, the master decided to abandon ship. A crew of 43 people were safely evacuated to another vessel. The reefer was reportedly carrying 560 tonnes of heavy fuel oil (HFO). The use of HFO has ben banned in the Antarctic since 2011, because of the serious risks it poses to the environment.

“These vessels are operating in an almost pristine environment so it’s vital they operate with the highest environmental safety standards, but this is clearly not the case,” McCallum added, while demanding that the Antarctic Ocean Commission stops vessels with such poor records from entering this wilderness.

Over the next few weeks, VICE will be on board the MV Esperanza in the Antarctic as researchers and campaigners attempt to uncover the true depths of illegal, poorly regulated and potentially environmentally damaging fishing in the Antarctic, in an effort to shine a light on this shady global transhipment system.