Although smallmouth bass feed similarly to largemouth bass, there are certain lures that can help you key in on smallmouth specifically. Typically when you want to shift your aim from specie to specie you target different lakes, or different areas of a lake.

Largemouth are more often found in weedy habitats while smallmouth are mostly in and around areas with sandy or rocky bottoms. It’s also more common to see a better population of smallies in clear water as opposed to stained water.

Now this isn’t to say you won’t catch them in the opposite on occasion, but more often than not these are the habitats they prefer. There have been plenty of times when anglers will be targeting largemouth territories and all of a sudden catch a giant smallie.

The purpose of this page is to simply help you target and catch more smallmouth with the best smallmouth bass lures.

When shifting your focus from largemouth to smallmouth, fishing different areas will be way more effective than changing your lure, but using these “classic” smallmouth lures will get you that much more dialed in.

The nice thing about smallmouth bass lures is they usually don’t have to be as weedless as largemouth lures. A lot of times you can throw baits with open hooks like a tube on rocky or sandy bottoms without having to worry so much about snagging weeds.

Typically smallmouth lures are also on the smaller side when compared to largemouth lures. For instance if you’re fishing soft plastics, an eleven inch ribbon tail worm is great for largemouth but a five inch stickbait style worm is much better for smallmouth. This means you will mostly be using lighter tackle when you’re in pursuit of smallmouth.

Spinning reels are a must when smallmouth fishing. When it comes to bass reels, spinning gear just handles light line and light baits much better than baitcasting gear. Like we said earlier, smallies are more often found in clearer water, so using lighter line is far less visible for smallmouth to see.

This will not only help you catch more smallmouth but bigger smallmouth. The bigger and older bass get the more suspicious the get about what they eat. It is also why finesse lures are very popular in smallmouth fishing.

Here are six examples of good smallmouth bass lures and how to fish them. The list is in order by season, basically in order of what lures work best from early spring to late fall. This of course is directly related to water temperature. 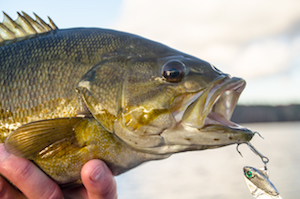 Fishing blade baits for smallmouth is an excellent cold water technique, but can also be very effective during the warmer months too when fished differently. It’s a bait that does not get seen by fish too often either which is always a plus.

When you’re working a blade bait like a Heddon Sonar you want to raise the rod tip up and then lower it reeling in the slack. This motion makes it swim and vibrate in an upward direction and then flutter down as it sinks. This mimics an injured baitfish and will often get smashed when it’s on the fall.

However, if you’re targeting bass in extremely cold water temps you want to work this bait way slower. The key is to let it sink all the way to the bottom and let it sit. Then you literally want to pop it up off the bottom every so often. I know this sounds boring but to get a bite in cold water from lethargic fish takes serious patience.

These style baits all fall into the category of finesse fishing lures, at least for the ones we will be talking about here. These are all soft plastic baits that are for the most part fished the same way, by dragging and hopping them along the bottom. These baits are ideal for rocky and sandy bottoms, where smallmouth like to cruise in search of crayfish. The only downside is they get caught between rocks every so often, so they are best fished from a boat so you can retrieve them.

All of these soft plastics should be rigged with a jig head to keep them down on the bottom. This also keeps the head down and the tail end of the bait facing upwards. The advantage of having this presentation is the baits will mimic a crayfish, which is what a smallmouth thinks they are looking at. These baits can also be rigged weedless if they need to be, depending on the area you are fishing.

Jigs are the most popular and best overall smallmouth bass lure, for two main reasons. There is no wrong time of year to be fishing for smallmouth with a some kind of a jig. And secondly, jigs are well-known as big bass producers, so they have high potential for landing a trophy smallmouth.

There are two main types of jigs that are most commonly used, a standard rubber skirted bass jig and a hair jig like a bucktail jig. This is where baitcasting gear can begin to enter the equation. Once you start getting in to 3/8 ounce and heavier jigs its best to use a baitcasting outfit. But 1/4 ounce finesse jigs or lighter are better used with spinning gear. 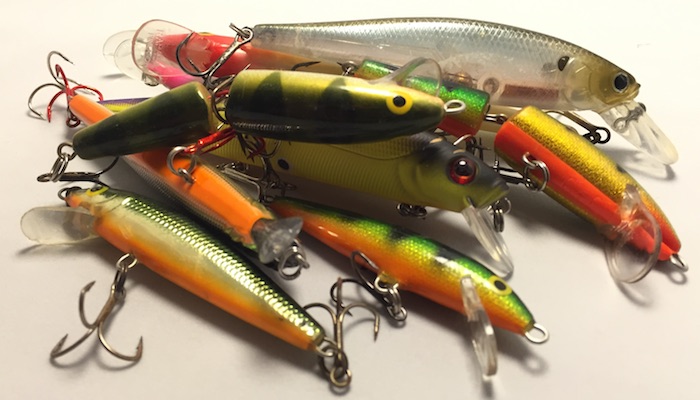 Another early-spring smallie favorite is the jerkbait. Jerkbaits make great cold water baits, and ideal for targeting smallies in the early spring cooler water temperatures. The reason it works so well is they have the ability to be worked really slow, this is especially true for suspending jerkbaits.

Natural colors work best, especially if you can match the species of baitfish that smallmouth typically eat in that particular body of water. Jerkbaits are great at getting reaction strikes, which is another advantage when fishing them.

Although very different in appearance, we put these two lures together because they are both power fishing lures. Crankbaits and spinnerbaits are very popular smallmouth lures when fish are active. Burning these baits along rock piles and weed edges is very effective. These are better options for deeper water, from six feet to as much as thirty feet or more.

If you’re fishing a rocky bottom try to get the crankbait to crash down in to the rocks, deflecting the bait off of them with the bill of the lure. These are also great choices if you are fishing a bottom that has a grassy bottom. Riding the crankbait just along the tips of the grass will often get a smallie to ambush. A spinnerbait is a better weedless option if the crankbait is picking up weeds. 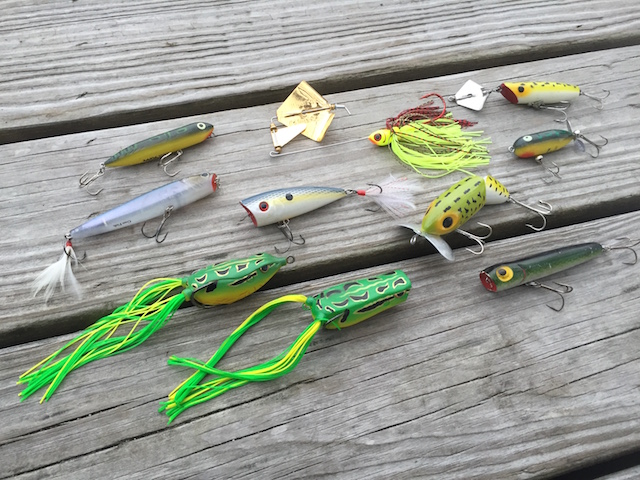 When smallmouth are feeding aggressively they can make largemouth bass look like slugs. And there’s no better way to catch them when they’re aggressive than with topwater lures, of course if the conditions are right. The best time to fish topwater for smallmouth bass is in the early morning and late afternoon. Unless it is cloudy with a light chop on the water, then mid day can be very productive too.