The following information is based on personal experience over the last 35 years fishing from various south coast ports from Newhaven to Weymouth and across to the island of Alderney. It is intended to just give a taste of the terrain where I have found Bass and the techniques that I have used to pick up the fish. I have deliberately stuck to bait fishing the different locations as I am in no way qualified to write knowledgeably about lure fishing. However more of my time is being spent on discovering more about lure fishing and I hope to learn much more over the next few years. I would encourage the reader to keep an open mind with your fishing and remember that there are no hard and fast rules when chasing Bass.

The first time I ever fished live Sandeels for Bass was way back in the 1970s aboard the Littlehampton charter boat Mark Twain which was skippered by the late, great Dutton Everington. Dutton would drift fish over a series of sand banks where we would catch Bass up to 6lbs or so. He used the classic presentation method of using a long shank hook around the 2/0 size fished on a six foot trace. The hook is gently threaded though the mouth of the Sandeel and then nicked through the skin of the belly of the eel so that it can swim freely.

Many years later in the summer of 2005 I found myself in Alderney aboard Richard English’s One for His Knob relearning the technique. Over three days I learnt much more about the technique and the importance of giving the Bass time to take the bait. Now I was using flurocarbon trace line and Portland rigs to present the bait but little else had changed. The new factor for me was to hold the rod at an angle of 45 degrees or more when feeling for the bites. On feeling a bite the rod could be slowly lowered until the Bass was actually pulling strongly at the rod tip in order to turn bites into hooked fish. Striking the fish meant missed bites most of the time. Those Alderney Bass were not big fish, mainly in the 3-5lb size range but they needed time to take the big Launce that we were using for bait.

A further refinement since that trip has been to use circle hooks. Now I can give the Bass all of the time in the world to take the bait knowing that they won’t be deeply hooked (a problem sometimes with the old technique and ‘J’ hooks). I just wait for them to pull the rod tip around.

The most difficult aspect of bank fishing is to find the fish in the first place. Back in local waters I have found banks that will only fish on the ebb. Goodness knows where the fish go on the flood but I have failed to find them. When you catch a dozen fish on the ebb it does seem a real mystery that they seem to disappear entirely on the flood.

All of this bank fishing with live Sandeels has been done on the drift and you do appear to have to cover the ground to find the fish although, once found, shorter drifts over the same part of the bank can turn up more fish before they become disturbed. One of the great features of this fishing is that you can use very light tackle as there are no snags for the fish to run into which increases the fun factor. I have tried larger live baits like Mackerel over the banks but Sandeel seems to be taken much more readily unless you have the very small Joey Mackerel.

On more than one occasion I have fished the same banks for Rays when I’ve not been able to get the live Sandeels and have caught Bass on a different technique. These have been bigger fish from 5-8lbs. It has happened a few times now so there is something to this technique so it might be worth trying in other locations. Some of the banks on my home patch show up big Blonde Rays which mean that I deploy 60lb plus traces or even heavier if I am fishing a pennel rig. The Bass seldom fall to these heavy traces. However a 30lb trace fished on a rig which is set up to drift around in the tide with a decent size Mackerel bait (half a fillet cut length ways like you would use for Turbot and Brill) has produced Bass when the bait is in motion. Dragging the baits on the drift doesn’t produce these fish though. As I don’t like to drag baits for the flatfish much above a drift speed of 2 knots I think tidal strength is the deciding factor. At anchor these baits are being fished in a faster tidal stream. 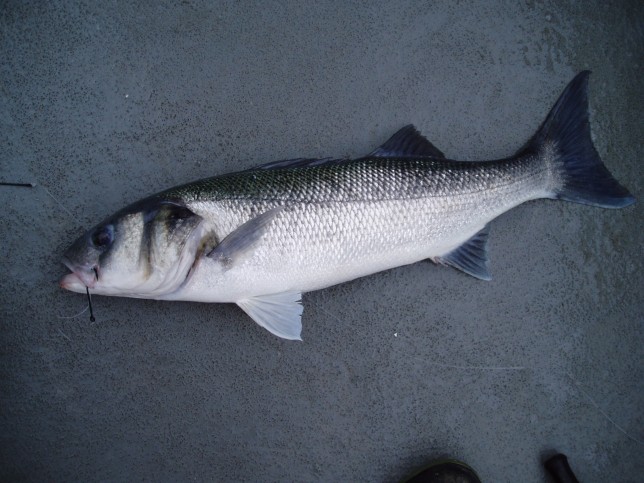