Obviously live fish are one of the main food items available naturally to a catfish and for this reason, it would usually be sensible to start a session on a new water with a livebait. The vibration given off by a tethered or suspended fish is always going be a great attraction, however some livebaits will always be better than others. The dominant species in the water you are fishing is usually the best place tos start and that is usually silverfish; roach, rudd, and bream. For something a little different, try tench, carp, or perch; they are hardy baits and can often be used for a long time before they tire.

Do not be tempted to take your own livebaits to your waters, it is illegal, irresponsible and a sure fire way of getting the method banned!

The majority of catfish anglers choose live baits of between 4-10″ when tackling UK waters, bigger baits will be taken but may cause presentation problems so think carefully about rigs and methods when outsize baits are utilised. Livebaits can be hooked through the root of the tail, the dorsal area, the ventral or the nose or lip. The most common way is to hook them through the top lip and out of the nostril; a small piece of rubber band or bait retainer is pushed over the point and barb and will stop it from wriggling free. A useful tip here is to use a large hook that has the point offset, you stand a far greater chance of getting a good hold with this type of hook.  Hook size should be selected in relation to the size of bait used but don’t be scared of using large hooks especially for really big baits of maybe a pound or more. Hook sizes 2-6/0 are the most useful to carry and in a variety of patterns. Circle hooks have gained popularity in recent years and are now the standard pattern for most livebaiters when fishing baits on the surface or up in the water. 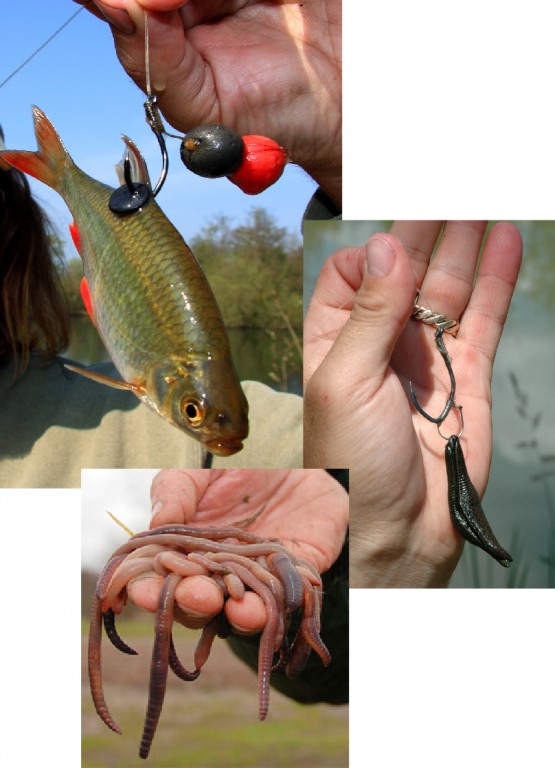 Baits need to be lively and attractive for best results and this is usually achieved by the addition of polyballs or rattles, a lively bait will give off strong vibrations. Another method of keeping baits lively is to use two or three smaller fish on the same hook, (tench, perch or gudgeon are well suited for this) This mini ‘shoal’ will continually swim against each other, which produces a good rattling effect.

Lobworms or nightcrawlers as they are sometimes called are one of the very best baits you will ever get for catfish. They are eagerly taken by catfish of every size and are readily available (for free!) by handpicking from damp lawns at night or can be purchased from your local tackleshop. Specialist worm sellers also operate mail order services. Don’t overlook other worms either; Dendrobaenas, redworms and brandlings can all be useful. Dendrobaenas are particularly active so make good ‘cocktail’ baits with lobworms, adding movement to the presentation. Some anglers have reported the ocassional success with marine species such as ragworm, lugworm and peanut worms (a species of lugworm) but these have a very limited appeal as they are generally expensive options that offer dubious results probably due to their inability to live for long in freshwater which only really leaves their smell as an attraction!

If there is a single type of bait that could ever be termed ‘catfish exclusive’ then it is the leech. Ok there have been a very few isolated cases where pike or even carp have picked up a leech intended for cats but other than that, they are just about as catfish exclusive as you’ll find. Some anglers have reported good results with horse leeches (Haemopis sanguisuga) which are a very commonly found UK species and easily collected from ditches, drains, lakes and ponds all over the country but they aren’t anywhere near as popular (or effective, some say!) as the more frequently used medicinal or blood leech (Hirudo medicinalis) Medicinal leeches are actually native to this country but are an endangered species only found in a few isolated areas. For this reason, they are protected by law. They are however farmed commercially in Wales by specialist supplier Biopharm. These leeches are produced for medical purposes but the older and larger ones that are surplus to their medicinal production are sold to catfish anglers. Biopharm occasionally offers CCG members special offers on fishing leeches and these are advertised here or on the forum.

Medicinal leeches are expensive baits but if used and kept correctly, they are long lived and can often be used to catch several fishes. With careful handling, leeches can be re-used over several sessions making them far more cost effective. Leeches are a very useful alternative when livebaits cannot be used.

How To keep and Look after Medicinal Leeches

We could loosely term almost any meaty or fishy bait that isn’t alive as a deadbait but generally anglers will be referring to dead fish. As is well known, catfish have a highly advanced olfactory system meaning that their sense of smell is extremely well developed and only exceeded by that of the eel. Clearly then, it makes sense to choose baits that fall firmly into the good smell category. Sea fish such as sprats, herrings, whitebait and mackerel are all superb catfish baits. Freshwater fish, especially the oily ones like trout or salmon also have distinctive smells, especially if they have been allowed to go off a bit! Even freshly killed baits can be attractive if they are punctured to allow body fluids to escape, a method that is often successfully employed by eel anglers. Lamprey sections will continue to bleed and leach smell into the water for many hours and again, are considered good baits. 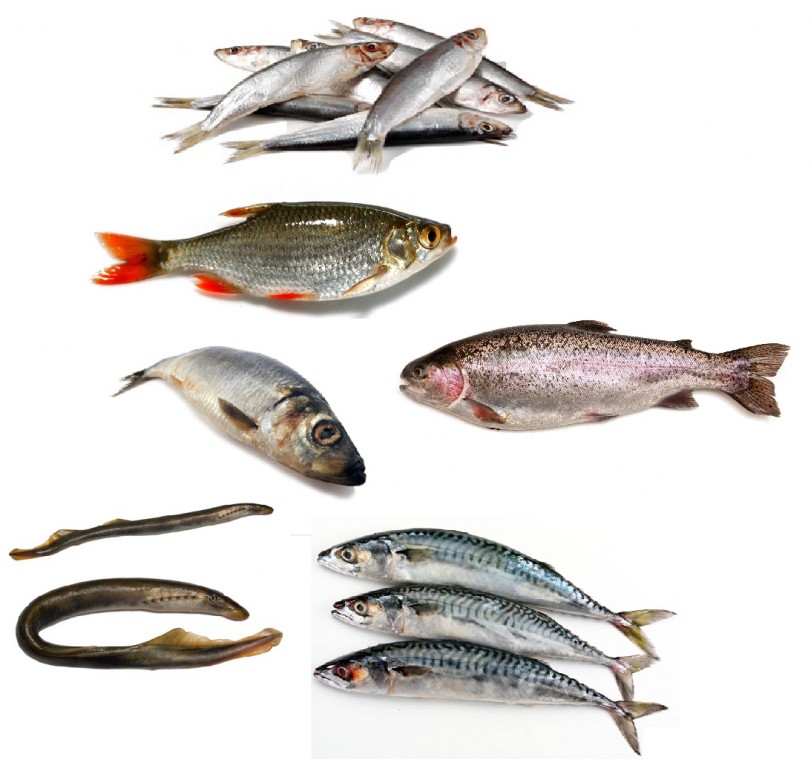 There are several advantages with using deadbaits, for instance they are well suited to pre-baiting and loose feeding and can easily be stored frozen without any of the hassles associated with trying to catch livebaits. Deadbaits are particularly suitable for fishing at close range.  It is generally worth mounting baits on hair-rig; a whole or half bait is ideal. The idea of this is not to fool the fish into taking the bait without feeling the line or hook on its lips, but to simply ensure that the whole of the hook is free to be struck into a cat’s mouth. Indeed it is beneficial to make certain that there is plenty of the hook exposed regardless of bait; getting catfish runs can be hard enough without missing them due to poor hooking techniques.

If we carry on looking at the natural diet of catfish, it becomes apparent that there is a whole host of non-fish alternatives that can be utilised as fishing bait. Swan mussels and water snails are found in virtually every catfish water and are readily eaten. Normally of course they are consumed whole with the shell still intact, but they are easily removed for hooking. Two large mussels on a size 1 hook must be one of the most appealing baits that you could ever offer a hungry cat.

From time to time, small dead animals such as mice, voles, rats, and birds will find their way into the water, all are readily eaten by catfish. Frozen rats, mice and day old chicks are widely sold for feeding to reptiles or birds of prey. These baits can be exceptional on certain waters. A hungry cat will eat almost anything even if it doesn’t occur naturally in its environment. By careful pre-baiting wels can be encouraged to take most things and on many waters that see a lot of catfish angling, most baits will have been tried. Many of these have become so successful that most catfish anglers will carry certain baits with them at all times, these include: sausages, meatballs, liver, luncheon meat, squid, pastes, pellets and boilies. The attraction of these types of bait can also be improved by soaking in flavours and oils, particularly the meaty or fishy ones.

Following consultation with the National Anguilla Club (NAC) the CCG Committee has endorsed this document in support of a total ban on the use of the European eel as fishing bait until further notice and is asking all members to respect this position.

The use of pellets and boilies seem to divide opinion amongst cat anglers. Some hate them, seeing them as carp or barbel baits and should not be used in predator angling, while others use them to make the most of their fishing. One thing is for sure they certainly catch catfish especially on waters that see plenty of bait introduced for the carp. Even on waters that don’t see lots of bait the cats are usually onto baited areas fairly quickly.

In recent years there has been a vast increase in the number of different brands of pellets in the tackle shops but the major one still being Dynamite baits. Many anglers chose to buy their pellets from wholesalers and good deals can be had bringing the cost per kilo down to a few pounds. Skretting select A halibut pellets are probably the best quality on the market and the larger 22mm pellet has accounted for many good catfish being landed over the years. Other notable manufacturers are Coppens which are widely used on the Ebro and readily available in the UK.

The quality in pellets is evident when you have used a few different brands, look for ones with higher oil content and that don’t crumble too easily when drilling out. Avoid dusty bags in your tackle shop these will probably have dried out and started to deteriorate. Adding vast quantities of halibut pellets is not recommended, smaller waters can suffer as the high oil content can lead to a reduction in water quality leading to many fisheries now limiting the amount of pellets you can use and in extreme circumstances have even seen them banned.

If there are dozens of pellets to choose from, then there must be hundreds of different boilies to tempt you in your local tackle shop. You can even make your own, making them bigger to make them more carp proof and add your own special blend of flavours for example. Whichever brand, flavour or size you choose the better ones for catfishing tend to contain a fishmeal base mix. They have a very fishy undertone to them and take added flavours on very well. Stick to the tried and tested brands to ensure good quality bait Mainline, CC Moore, Dynamite, Nutrabaits and Nash all make excellent bait and more recently Catmaster tackle launched a boilie designed specifically for catfishing, these are available glugged ready for use. 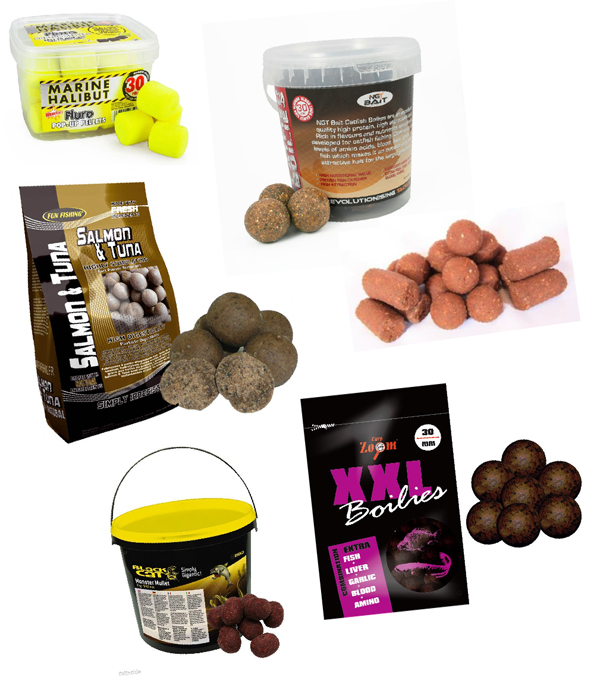 On heavily populated carp, bream or tench waters it’s advisable to double or even treble up on these kind of baits, wrapping a smelly paste around them to create a sausage effect is also a little edge that not only adds to the attractiveness of the bait but also make it harder for the aforementioned species to take the bait. Both pellets and boilies are convenient to use and often out fish more traditional baits, cat anglers ignoring them do so at their peril.